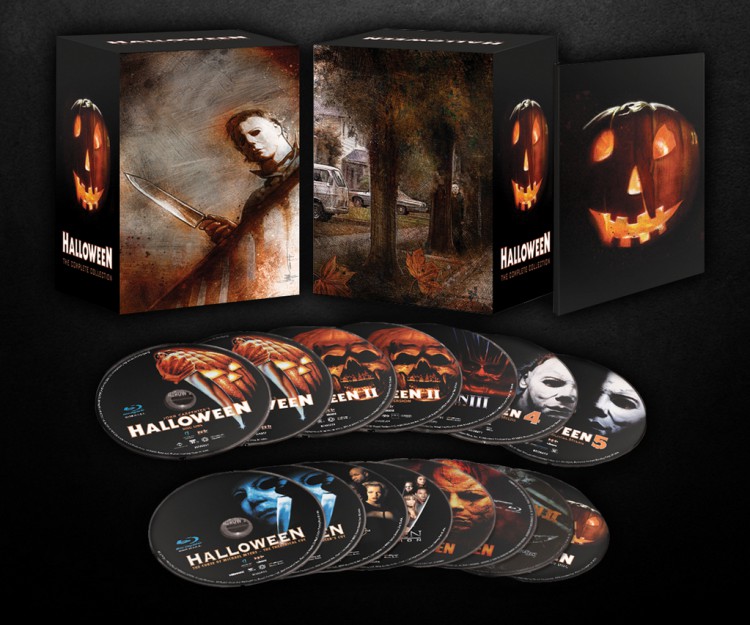 Being a Halloween fan and collector has not been  easy.  There have been 10 films thus far and it seemed like all of them were owned by different entities along the way.  One company would put out a packed Blu-ray or DVD of the first film while another company put out a couple sequels and so on.  While we’ve seen box sets come out for almost every other 80’s slasher icon, It seemed like a box set collecting all the Halloween films would be impossible. Somehow that all changed this week.  Scream Factory, a company that has become a savior of horror cinema in recent years figured out a way to get all the rights owners to agree and get a box set together that not only collects the films but collects almost every single special feature that has ever been made for each one!  Including a commentary track for H2O that fans of that film have wanted since the movie was made!

This set is a wet dream for any Halloween fan! Every film is here presented in the most perfect and beautiful transfer possible!  The original film has plenty of commentaries and probably the best transfer the film has ever seen.  It includes the TV footage separately so those of you who still own the Extended TV Version Anchor bay put out nearly 10 years ago with the footage spliced into the movie, may still want to hang on to that.

The biggest draw for many fans will be the inclusion of Halloween 6: The Producers Cut, which has been a popular bootleg for many years.  This version of Halloween 6 delves deep into the thorn cult in a bigger way than the theatrical cut did.  I was never  a big fan of the thorn cult subplot that was introduced in part 5 so I’m not a big fan of the producers cut.  It has some interesting ideas but one of the worst endings I’ve seen for any Halloween film.  The theatrical version really isn’t a lot better but I still prefer it.  But its awesome that we have both versions in this set in shiny HD finally!

My only criticism of the set is that it doesn’t include the theatrical cuts of Rob Zombie’s Halloween, and Halloween 2.  Only the directors cuts are included and that’s fine  but the theatricul cuts are fairly different for each film so it would have been nice to have both.  I’m still working my way through the box set so I have lots more to discover!  Its amazing that we finally have this set and that is as jam packed with features as it is!  Scream Factory and Anchor Bay have really outdone themselves!  For any Halloween fan this is a “MUST HAVE”!